WHERE THE BOREAL FOREST MEETS THE TUNDRA 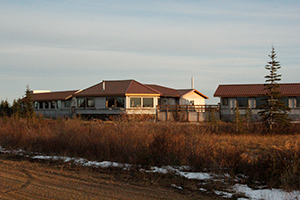 November 2016 – My wife Rae-Anne and I, together with a small group led by our friend, Professional Photographer Roy Toft, had the good fortune to travel in early November to the Canadian far north, approximately one hour’s flying time south of Churchill, Manitoba, to study Canada’s infamous polar bears.

Churchill Wild operates three remote lodges on the shores of Hudson Bay and we chose to base at their Nanuk Polar Bear Lodge where we were able to study and document the polar bears on foot at eye level, as well as witness other wildlife, including wolves, bald eagles and snowy ptarmigans. 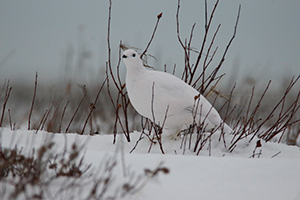 Researching polar bears in the wild has been on my trip priority list for several years. With the huge uncertainty of how climate change will affect polar bears in the Canadian Arctic in the future, this opportunity was definitely a dream come true. And I can tell you, we experienced the full gamut in terms of weather, including a snow storm, rain, fog and even sunny, warm days where you actually had to take off your arctic jacket!

When we arrived at the lodge, we were surprised to see several huge polar bears just hanging around the compound, almost as if to greet us. This allowed us tremendous opportunities to photograph the bears at point blank range, both through the compound fence and in completely unobstructed fashion during our twice daily treks on foot outside of the compound (always with highly trained and experienced armed guides watching over us). 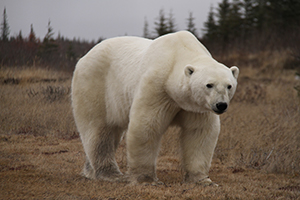 The polar bear viewing at Nanuk Polar Bear Lodge as it’s structured was very similar to my recent wildlife expedition photographing the Coastal Brown Bears in the Katmai Coast of Alaska — a small, tight group of people keeping very low and quiet. The main difference between the two expeditions though was that the polar bears proved to be much more curious of us (and much more aggressive at times) compared to their grizzly cousins. Once a polar bear spots you, it generally comes your way. Fortunately, the experienced guides have all manner of steps they can take to ward off the overly curious ones before ever having to resort to their rifles.

All in all, the polar bears we studied on this expedition were huge — well over 1,000 pounds. It’s funny how temperatures around freezing seem so cold to humans yet polar bears find it too warm; they actually restrict their movements until temperatures really drop! And we were extremely fortunate to witness them in a variety of natural habitat environments, including the shore pack ice, making for excellent painting reference for me. 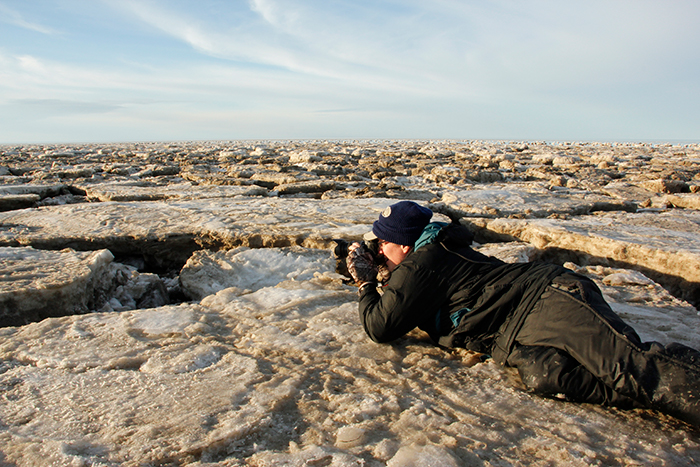 A highlight of this expedition was the sighting of a beautiful black wolf that hung around the lodge for a couple of days. A good photographer on his game would have no problem getting some fantastic shots, however, keeping the small group of us calm was the biggest challenge. Very exciting!

During our twice daily excursions outside the lodge compound, we toured the area both on foot and in ATVs. Between my wife and I, we gathered tens of thousands of photos that I will be able to use as reference for future paintings. And some of these photos included the amazing sunrises and sunsets over the shores of Hudson Bay. They are truly breathtaking — you just don’t see skies like that at home.

The polar bear is an iconic species and has become the poster child for climate change. The Churchill, Manitoba, area is key for polar bears for many reasons, the most important of which is that it is here that the ice on Hudson’s Bay forms first, and that ice is key to the polar bear’s survival. The sooner a polar bear can get out on the ice, the sooner they can catch their main food source — seals. There is a large influx of freshwater drainage in the Churchill area and due to counter clockwise current in the bay, the freshwater tends to pool with a lower salinity, hence a quicker ice freeze. That’s why it’s vital that the area be adequately protected. And the area where the Nanuk Polar Bear Lodge is located is equally vital as it is snap dab in the middle of newly discovered bear denning sites. 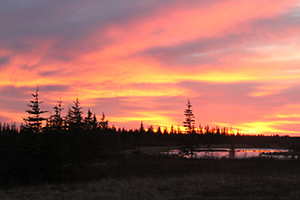 During this expedition, my wife and I learned a great deal about the polar bears — how they can smell a denning seal in their ice den covered by snow up to a kilometre away, and once a bear finds a den, they pounce on it to break the snow and ice cover, and then reach in with their longish neck to grab an adult seal or a pup. This is the very reason why polar bears have evolved with longer, slender necks. All the polar bears we saw during our time at Nanuk were all quite healthy and obviously well-fed. 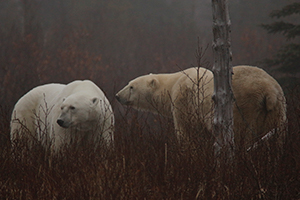 One thing that was most surprising to us, considering the remoteness of where we were, was the first-rate accommodations and dining we experienced at the lodge. We couldn’t imagine it being any better. The food was nothing short of spectacular and prepared by a master chef, and we were thrilled to eat a variety of fresh, local foods such as moose, goose and arctic char. This expedition was truly amazing for us both — having wine and hors d’oeuvres in the main lodge at day’s end and re-living each day’s adventure with our new-found friends by a roaring fire.

This was one expedition Rae Anne and I won’t soon forget — and we hope to return soon, but this time, with a fishing rod in hand!

Polar bears are the largest land carnivores in the world, rivaled only by the Kodiak brown bears of southwestern Alaska. Polar bears sit at the top of the food chain in the biologically rich Arctic. The most carnivorous of the bear species, polar bears feed primarily on the fat of ice-dependent seals. The remains of these seals provide food for many other Arctic wildlife species, giving polar bears a vital role in their ecosystem.

Being marine mammals, polar bears spend much of their time on Arctic sea ice. Many adaptations make polar bears uniquely suited to life in icy habitats. Their fur is thicker than any other bears’ and covers even their feet for warmth and traction on ice. A thick layer of blubber beneath their fur provides buoyancy and insulation. The long neck and narrow skull of the polar bear probably aid in streamlining the animal in the water while warming the air that they breathe, and their front feet are large, flat and oar-like, making them excellent swimmers.