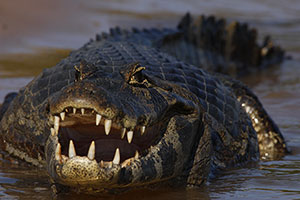 July 2015 – My wife Rae-Anne and I just returned from an amazing two-week expedition to the Pantanal in Brazil, the world’s largest tropical wetland region and home to one of the largest and healthiest jaguar populations on earth.

The Pantanal is located mostly within the Brazilian state of Mato Grosso do Sul, but it extends into Mato Grosso and portions of Bolivia and Paraguay as well. It sprawls over an area estimated at between 140,000 and 195,000 square kilometres (54,000 and 75,000 sq mi). 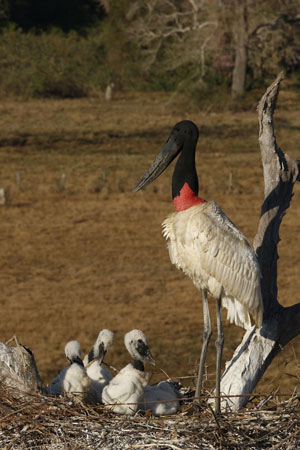 The name “Pantanal” comes from the Portuguese word pântano, meaning wetland, bog, swamp, quagmire or marsh. By comparison, the Brazilian highlands are locally referred to as the planalto, plateau or, literally, high plain. Roughly 80% of the Pantanal floodplains are submerged during the rainy seasons, nurturing an astonishing biologically diverse collection of aquatic plants and helping to support a dense array of animal species. 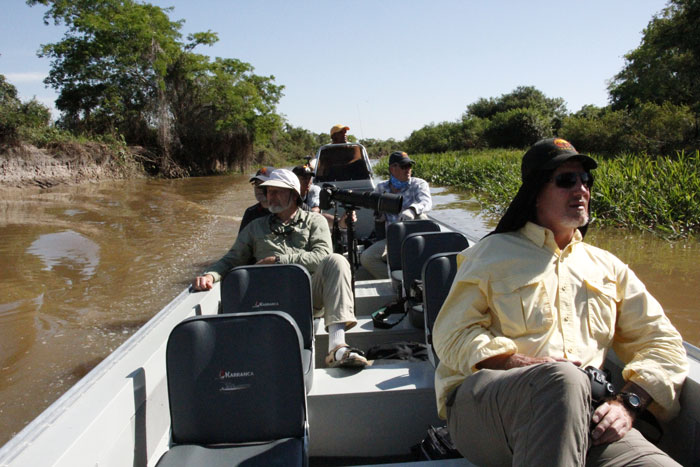 The Pantanal ecosystem is thought to be home to 1000 bird species, 400 fish species, 300 mammalian species, 480 reptile species and over 9000 different subspecies of invertebrates. Among the rarest animals to inhabit the wetland of the Pantanal are the marsh deer and the giant river otter.

Parts of the Pantanal are also home to many endangered or threatened species, such as the hyacinth macaw, the crowned solitary eagle, the maned wolf, the bush dog, the South American tapir and the giant anteater. Common species in the Pantanal include the capybara and the yacare caiman. In addition to the caiman, many other reptiles inhabit the Pantanal, including the yellow anaconda, the gold tegu, the red-footed tortoise and the green iguana. Last but not least, the Pantanal is home to one of the largest and healthiest jaguar populations on Earth. 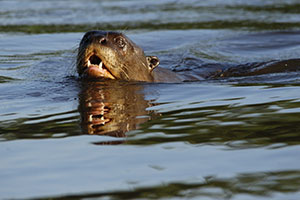 After three flights, a six and half hour drive and a half hour boat ride, we arrived at our destination in the heart of the Pantanal. Although it was their winter season, we experienced an unusually warm spell during our entire time there; 38 degrees celsuis, total sunshine with not one cloud in the sky, very little breeze, not an ounce of precipitation and no humidity! Quite different than even our best summer weather here at home. Needless to say, this expedition was our most challenging so far due to this extreme environmental challenge. 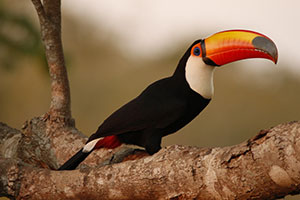 During our two-week expedition, we spent several nights at a ranch just inside the Pantanal region on banks of the Pixaim River, and then the remainder of the trip at a floating lodge at the conversion of the Cuiaba and Piquiri Rivers. Each day followed the same heart-pounding photographic itinerary via boat excursions on the rivers; out at 6:00 am until 11:00 am, lunch at noon, out again at 2:00 pm until 6:00 pm, dinner at 7:00 pm, then collapse at 9:00 pm. Rinse and repeat.

Our expedition to Africa in 2013 during their winter season utilized an identical itinerary, but without the 38 degree heat and constant sunshine! So, needless to say, this felt quite a bit more arduous. 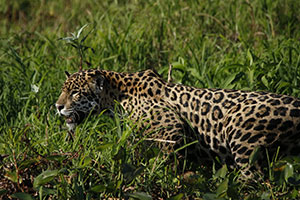 Although it was the chance to witness the Pantanal’s infamous jaguar population that initially drove us to come here, we were very excited and surprised at the extensive variety and large numbers of other amazing wildlife and bird species this region offered. It is estimated there are 10 million caiman in the Pantanal, and they are surprisingly beautiful with their pink mouths, white teeth and multi-coloured, spectacled skins. Albeit the largest in the world, considering capybaras are rodents, they are unexpectedly cute. The giant river otters certainly have a more ominous look about them when compared to the small river otters we have in Northern Ontario, but they are 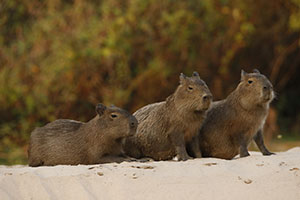 still just as social and playful. And if birding is your passion, then you must visit the Pantanal! With 1000 bird species in the region, they are at every corner.

Visiting the Pantanal in Brazil this year was virtually on out-of-body experience that we will never forget. A return trip is certain, but in the meantime, I’ve got a lot of work to do to do it justice, so stay tuned for a whole new portfolio of paintings depicting the beauty and diversity of the Pantanal.

Stretching across Brazil, Bolivia and Paraguay, the Pantanal is the world’s largest wetland, sprawling over approximately 195,000 square kilometers (75,000 square miles). and although not as well known as the Amazon Rainforest to its north, this gigantic seasonal floodplain is overflowing with birds, vibrant vegetation and exotic animals lurking in the marshes.

The Pantanal is also home to a variety of sub-regional ecosystems, each possessing distinct hydrological, geological and ecological characteristics. During the rainy season, the Pantanal’s floodplains are completely submerged as water levels rise between 2 and 5 meters (6 to 16 feet), which helps nurture a remarkably diverse array of aquatic plants and animals species. During the dry season, the plains drain and the floodplains become grasslands, providing more space for a different set of species.

Brazil is widely regarded as the best place in the world to see jaguars — the third-largest cat in the world — and the jaguars of the Pantanal are the biggest of all. They specialize in hunting caiman, and despite being one of the world’s most elusive cats, your chances of seeing them in the Pantanal are pretty much guaranteed.